Closing in on Bermuda

On the water there are duels aplenty, and a warm welcome is awaiting the fleet at the Royal Bermuda Yacht Club.

After enjoying three days of exhilarating fast reaching conditions in the Atlantic Ocean, high pressure enveloped Bermuda and the surrounding seas, producing light downwind conditions for the international fleet. Whilst the fleet has slowed, the intensity of the competition has not diminished, with a strong battle developing for the podium for IRC and CSA and with fresh breeze expected to lift the fleet to the finish. 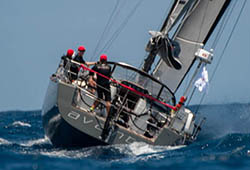 Vying for the podium in IRC is Jeremi Jablonski's American Hanse 43 Avanti. The team was runner up in 2017. Avanti is 121 miles from the finish and in Sunday's blog (13 May) Jeremi commented: “A tough day on the water it was - not much wind would be an understatement! After sunset we are seeing more stable wind from the E-ESE. Code - 0 with a staysail works quite well. Getting tired, but all good.”

Avanti is estimated to be under two hours ahead of Giles Redpath's British Lombard 46 Pata Negra skippered by Oliver Heer which is 98 miles from Bermuda.

Arnt Bruhns' German Class40 Iskareen is expected to finish the race around sunset in Bermuda on Monday 14 May. The team of four crew will be the third to finish in IRC and challenging for the podium.

Eric de Turckheim's French Nivelt-Muratet 54 Teasing Machine has made the reluctant decision to retire from the race. The crew and yacht arrived safely in Bermuda in the early hours of Monday 13 May: “One of our crew member needs to get back to Europe within the shortest delay for personal reasons,” explained Teasing Machine's Laurent Pages. “The weather conditions are not allowing us to reach Bermuda in racing mode. We are all disappointed not to be able to finish the race, but as a team we agreed this is the best solution. The entire team would like to thank the organisers and all the passionate volunteers that have contributed and helped with the running of this Antigua Bermuda Race.” 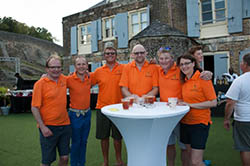 Louis Goor's Irish Oyster 625 Irene III is expected to finish the race around midday local time on Monday 14 May. As permitted in the race, yachts may use their engine in the CSA Division. Irene III has logged its engine hours for propulsion with the race management team, and upon arrival a big welcome will be waiting for them at the Royal Bermuda Yacht Club.

Less than 24 hours from the finish, five teams are vying for the podium in CSA. Pata Negra is the closest to Bermuda, five miles ahead of Morgen Watson's Canadian Pogo 12.50 Hermes. Juan Grunwaldt's Uruguayan Bavaria 56 Caliope is estimated to be third in CSA with 126 miles to go. Chris Stanmore-Major's Canadian Volvo 60 Challenger is also in the mix.

Warrior smashed their own race record set last year by over 24 hours, much to the delight of Stephen Murray who was greeted at the finish line by Antigua Bermuda Race Chair, Les Crane.

“It's great to be here. That was a quick ride, thrilling and exciting,” smiled Murray. “We did half of the race in the first 24 hours. After that it got a little slower and more challenging as we got close to the high. This is a my favourite race course; predominately downwind in good pressure, it’s warm and really nice sailing and this race is on our list for as long as we can do it. We have good competitors this year so we had our work cut out to win on corrected time.”